Sant Jordi: feel the legend in the Historic Quarter! 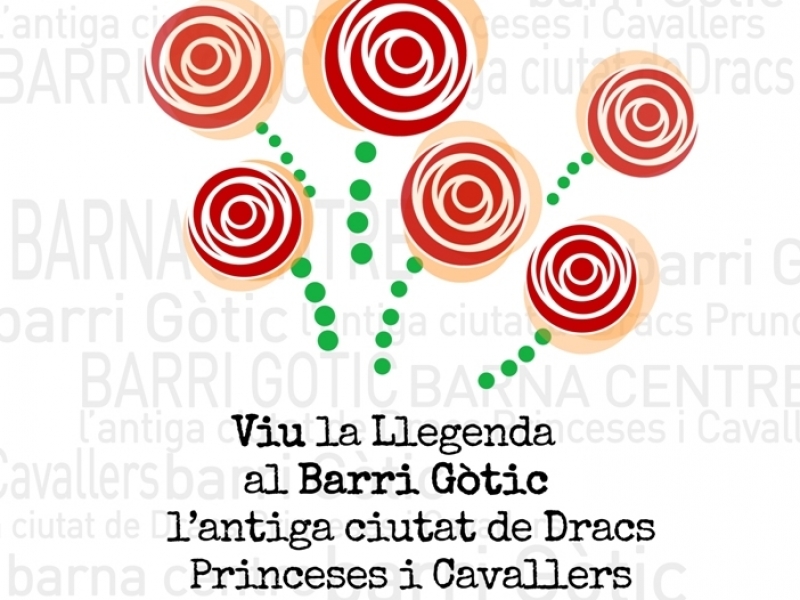 The classic epicenter of National Day , La Rambla, features news this year. The bookstores occupy the highest part of the walk, near Paddles , where traditionally the tents of the political parties that will be settled to the bottom section . In total there will be 226 stalls selling books and 16 florists in the pathway offered roses , bouquets and floral creations all . In addition the council , like last year, has distributed a skirt stops on the conclusion, to create a coherent picture of the route.
But this 2014 , as part of the commemoration of the Tercentenary , Born Cultural Centre released a documentary on the legend , suitable for all audiences and performed by a group of historical reenactment of Montblanc, every hour and takes 20 minutes will be issued.
In addition , the knight and his illustrious Sant Jordi entourage begin at 18 am a parade starting in Plaça Sant Jaume
In the Plaza dela Mercè ( Gòtic south) will be the Mostra d' Entitats III , with a keynote opening speech at 11 by the composer Quico Pi de la Serra , exhibitions on the work of various social and cultural organizations , and book signings reading aloud , snack and playground.
On the other hand, Mobile World Centre will celebrate Sant Jordi embossed roses live in 3D and with 41 authors will sign their books throughout the day and in the orchard of the Museu Frederic Marès be "released " dozens of books in the original bookcrossing session , which will end on Sunday with a meeting of collectors of bookmarks .
The World Book Day is also a regular open house in city institutions , museums and cultural facilities such . Here are some of the highlights:
- City of Barcelona : 10 to 20 hours you can visit places like Hood Bon Consell, the Salo of Cròniques , the Salo de Cent or honor the Mayor 's office . At the door, selling roses solidarity . And in the adjoining Sala Ciutat , exhibition and sale of monographs on the Catalan capital.
- Library of Catalonia : guided tours and free tours, concerts and musical groups pianola district from 10:30 to 19 hours.
- Barcelona Athenaeum : Free tour of the Palau Savassona of 11 to 20 hours ( library , garden , chat rooms ), cultural activities , book sales and sponsor campaign for the restoration of historical books .
- Institut d' Estudis Catalans ( IEC ) : Free guided tours or 10-20 hors to its headquarters , the House of Convalescència , for areas such as the patio, the cloister garden Rodoreda the Sala Prat de la Riba and chapel. Exhibition on Mancomunitat de Catalunya and selling books .
- Museu d' Historia de Catalunya : Free entry and deals in the library of the museum.
- Archaeological Museum of Catalonia: guided tour of the library at 11 and 12:30 hours.
- Domus Sant Honorat ( MUHBA ) : free visit to the site ( street Fruita 2) , where you can see the remains of a house and a Roman street.
- Directorate General for Language Policy : open to the documentation center ( Portal de Santa Madrona, 6-8), Catalan dubbing studio gates and exhibitions .
- Termcat : open 12 to 14 hours ( Calle Mallorca , 272) , and guided exposure and distribution of publications Termcat visits.
- Film Library of Catalunya : screenings , book presentations , children's activities and three tours of the Library of Cinema ( 10, 13 and 16 hours ) visits .
- Modernist Campus Sant Pau : free access to normal spaces visit gegantera music performance .
- Teatre Principal : open from 10 to 14 and from 16 to 18 hours door to the historic building , recently restored .
- Maritime Museum : ' The Library baixa to gard ' , Viking and bookcrossing readings.
- Museum of Erotica : Erotic Garden Free access to 17 to 19 hours.
- Palace of Captaincy : open 10 to 18 hours at the current headquarters of the Army Inspector General , for the cloister of the seventeenth century, the grand staircase and the throne room , among other places .

Another key scene of this Sant Jordi in Barcelona will be the libraries. For the second year celebrate Sant Jordi Revetlla with over one hundred activities for all ages until one in the morning.
In Nova square in front of the Official College of Architects of Catalonia , there will be concerts jutges 4gats group '4 ' at 12, 13:30, 15:30 and 17 pm and a book exhibition Cooperative d' arquitectes Jordi Capell