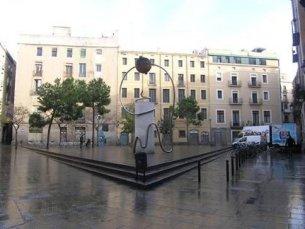 On Monday 24 January, started the works to remodel the place George Orwell, located in the Gothic Quarter. The remodelation Is expected to completed by the end of April.

The main purpose will be the replacement of the triangular platform that bridges the gap of the square by an inclined plane, eliminating the three steps to access the high triangle where concentrations often result in antisocial behaviors. Relocate the existing sculpture on the new single level of the plaza, which will also include a playground. Intervention in George Orwell Square is motivated largely by the need to improve public use of this public space of the Gothic quarter. The three steps leading to the triangle that makes up the high level of the plaza has become a meeting point for deriving mass gatherings, especially at night, uncivil behavior and attitudes, with consequent inconvenience to the residents of the area. To find a more familiar use of the square, the new platform will be placed only a playground.

The action will also involve the repair of the pavement and the replacement of existing sewers by a siphon type. The square keep Cristòfol Leandre sculpture, currently located on the large triangle and will be relocated on the new single level of the plaza. The total area of the remodeling will 859'36 square meters. The work was carried out construction and AMSA are expected to last three months.

George Orwell Square was one of the first public spaces created in Ciutat Vella in the context of the transformation and revitalization that has taken place in the historic downtown neighborhoods since the early eighties. It was designed in 1989 as an overrun operation of the high density of urban fabric that had Ciutat Vella. To open the new space was necessary to demolish all the properties that were among the streets Escudellers Arenes and Arai.