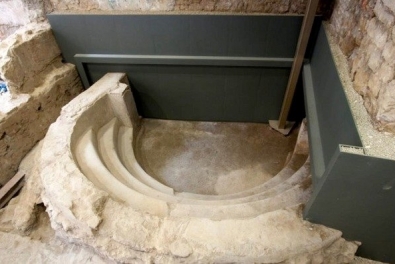 “Inside and Outside of the Walls: Power, Hygiene, and Commerce in Barcino” is a route through the period in which, for the inhabitants of Barcelona during the Roman Empire, hygiene was an important aspect of everyday life. Later, in the Middle Ages, the custom of keeping the body clean was lost as were the public baths. Fortunately, however, we have recovered the custom and, in part, the remains of those public baths which we can still visit today.

We will do so at the beginning of the route organized by the Museu d’Història de la Ciutat, which begins there and then passes by what remains of the Roman wall. The baths which will be visited were constructed in the 1st century and were then known as the city's gateway to the sea, the sea-side entryway to Barcino.

For the last few months the Centre Cívic Pati Llimona has expanded its space and now occupies numbers 7-9 of calle Regomir in the Gothic Quarter. This was made possible after the renovation of its building in which 17 more meters of the Roman wall, and the remains of the baths that will be visited at the start of the route, were discovered.

If you want to participate in this tour you should reserve a space by calling 93 256 21 22 or sending an e-mail to reservesmuhba@bcn.cat

Barcelona will open stores in summer