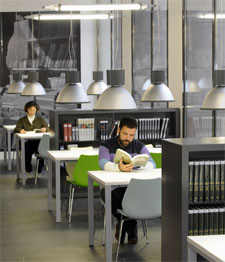 From on Sunday May 2, 2010, the Gothic is equipped with a new Library, Andreu Nin, located on the Rambla in the city, in Plaza del Teatro, and occupies the basement of the old Grand Hotel Falcon, original year 1879. The architectural and graphic intervention has been done on the computer have been carried out by architects and Ramon Farré-Escofet Massimo Preziosi, partners in the study of architecture Architecture M1441, which have created a unique space that retrieves the shortcut from the Rambla and minimizes internal divisions, with the aim of maintaining the same fluidity of movement that characterized the typical relaxed stroll the street where is located. The rest of the building is occupied by the College Elisava.
The library has a total area of 1,000 m2 distributed on one floor, and hosting all the services and the collection of documents, also shares the hall with the College of Design Elisava. The initial collection is 17,000 volumes and 65 subscriptions to newspapers and magazines. There is also a multimedia room equipped with 12 computers. The initial investment has been about 2.9 million euros, divided between the city of Barcelona, Barcelona Provincial Council and the Generalitat de Catalunya

A chair for the elderly