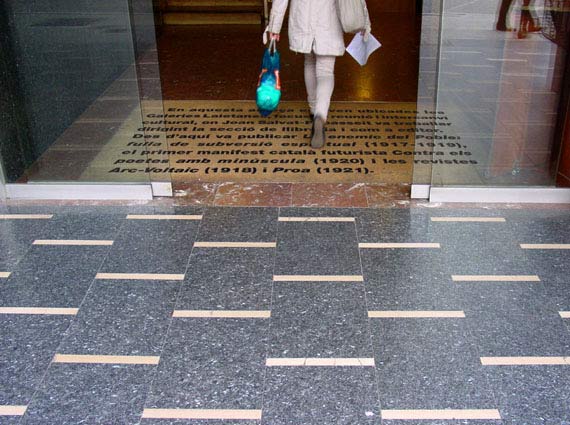 From 23 December 2010 to 3 April 2011 in Arts Santa Monica. As a visual way, the exhibition shows a chronological route to reconstruct the process that conforms the vital, intellectual and aesthetics biography of the Catalan poet Joan Salvat-Papasseit (1894-1924), signalling his contribution to the ideological character of the first literary —and plastic avant-garde— in Catalonia.
The are three basic spaces, from the metaphor of the symbolic architectures that represent the evolution of the poet: ATENEU, place of training and of political collectivity that represents the time of the wake up of the social consciousness and of the first journalistic literature of Salvat; THE GALLERY, a field of relation with the world of the art and the artists through the Galleries Laietanes where works Saved, space of reception of the European avant-garde; THE SANATORIUM, the last architecture of the poet related over time of convalescence and physical and aesthetic seclusion.
Five contemporary artists participate of this route realising a personal reading on the work, the ideological thought and the cultural relations of the poet: Francesc Abad, Isabel Platitudinous-Jordi Canudas, Domènec and Eloi Puig have realised a specific project by the exhibition putting of relief the force and the creativity of the poet and his ethical writing.